Each year winter air pollution chokes the northern region of India. Meerut is among worst affected cities from air pollution.

The prominent causes of pollution are similar such as industrial pollution, vehicular pollution, stubble burning, garbage burning, construction-based pollution, amongst others.

In the past few years, the legislature, executive, and judiciary have been tackling this issue head-on and have been trying to figure out concrete ways to mitigate the hazardous impacts of the toxic winter air pollution. Similarly, the Supreme Court is hearing this matter currently and is instructing all the state governments to follow certain steps for curbing air pollution. However, the quick fix solutions like banning construction activity, industrial activity for certain duration do not yield desired long term benefit. 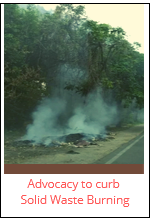